An Overview of Synlett Spotlights after 10 Years and 300 Editions

In 1999, the editorial board of Synlett introduced a new section called Synlett Spotlights. The Spotlight articles focus on selected reagents chosen by graduate students and emphasize their preparation and uses. The first published Spotlight concentrated on bis(cyclopentadienyl)titanium(III) chloride (Cp2TiCl) and was compiled by Helen J. Gold from the University of Cambridge, UK (Figure 1). [¹] 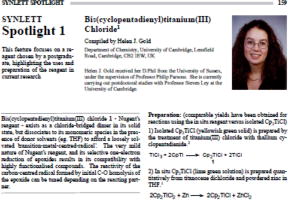 This year, Synlett celebrates its 20th birthday, and the 300th edition of Spotlight is to be published in issue 24. After ten years, the Spotlight section has become quite established and is well recognized by readers. Thus, after 300 editions, what could we extract from this innovative section and how has it changed? This summary will provide some facts and figures on the Spotlight section and highlight its influence on the international chemistry community. The data presented here were collected from the Synlett homepage [²] and from the ISI Web of Knowledge [³] and reflects only the author’s impessions. Further, supplementary material is available for more information concerning Spotlights.

From a geographical point of view, in the first two years of publication, more than 70% of Spotlight articles originated from Europe (Table 1). However, the publication of two articles from India presaged the fundamental change that would occur over the following years. A screening of articles by region over the last two years indicates a completely different situation is developing in which contributions from the Asian scientific community has begun to predominate. Unfortunately, so far there have been no Spotlight articles from African groups.

José C. Barros is a chemical engineer from the Instituto Militar de Engenharia (IME). He spent a year in France at École Nationale Supérieure de Chimie de Clermont-Ferrand (ENSCCF), then undertook an M.Sc. at Universidade Federal do Rio de Janeiro (UFRJ). He is currently working toward his PhD at UFRJ working on the synthesis of Selective Estrogen Receptor Modulators by means of palladium assisted C-C coupling under the supervision of Professor J.F.M. da Silva and Professor O.A.C. Antunes. José C. Barros is the author of a Spotlight article published in 2005.

Looking at the distribution of contributions by country (Table 2), it is noteworthy that the developing countries, and notably the BRIC countries (except Russia, which has not yet contributed to Spotlight) are leading the publication table for this section, with India accounting for 33% of all articles, followed by Brazil, China, the European countries and USA. It is also remarkable that Iran, with twelve articles, is the only representative of the Middle East region. This compilation uses affiliations at the time of publication and does not represent the nationality or current address of the authors.

In order to assess the pertinence of Spotlights, the number of citations of articles was compiled (Table 4). In this context, it could be said that the average number of citations for articles published shortly after the launch of Spotlights remains between two and five. Articles published over the last few years are probably too recent to be cited.

Using the number of citations to each Spotlight, an impact factor (IF) for the Spotlight section was compiled as if this section were a journal. To do this, it was calculated for each year the number of times ISI-indexed journals cited a spotlight article published in the preceding two years and divided this number by the total number of spotlight articles published in those two years. [²¹] As can be seen from the Table 6, the simulated IF reached its highest values in 2002 and 2007 followed by a decrease. In order to avoid misinterpretation of these values [²²] it is important to note that the low number of Spotlight articles and associated citations make any statistical analysis problematic; the sole conclusion that we can draw here is that if Spotlight were a journal then its impact factor would be greater than 0.5. It should be remarked that attaining a high IF was never the goal of the section.

As concluding remarks, the Spotlight section gives young researchers at the beginning of their careers an opportunity to publish information on interesting and relevant subjects. The preparation of a manuscript requires the student to stay connected with recent updates of the literature. Moreover, as the sole author of a Spotlight article, the student actively participates in the peer review process, which commonly involves defending their position, accepting criticisms and finally being judged by the scientific community, without direct interference from supervisors; overall, this process greatly enhances the professional maturity of the student. As a consequence of the publication, theses student-authors usually become part of the journal’s board of referee’s, which can also lead to their professional development.

Furthermore, it is not only the student that benefits from publishing a Spotlight article: some governmental funding agencies (e.g. CAPES - Brazil) have already recognized and highlighted Spotlight publications in the performance evaluation of graduate schools.The Spotlight layout, which is direct and easy to read, allied with the fact that it is freely available through the ­Thieme/Synlett Internet portal, accounts for its recognition as a first line reference source, as indicated by the number of citations of some articles. This open-access model could also influence the observed geographical distribution of the Spotlight contributors and readership, who generally originate from recent developing countries.

After 10 years, 298 different student authors from 29 countries have published 300 Spotlights covering reagents from the simplest ‘The Electron’ (Sp. 18723) to complex polymers, metal complexes, or systems involving several chiral centers, and received 698 total citations. Today, there are still only three internationally recognized journals that contain sections directed towards graduate students: Synlett Spotlight, Nature’s post doc journal and Mini Review: Green Cluster of Research Journal of Chemistry and Environment. Thus, graduate students all over the world congratulate Synlett and its editorial board for this innovative section and for allowing us to participate in the peer-review process of chemistry.

Supporting Information for this article is available online: