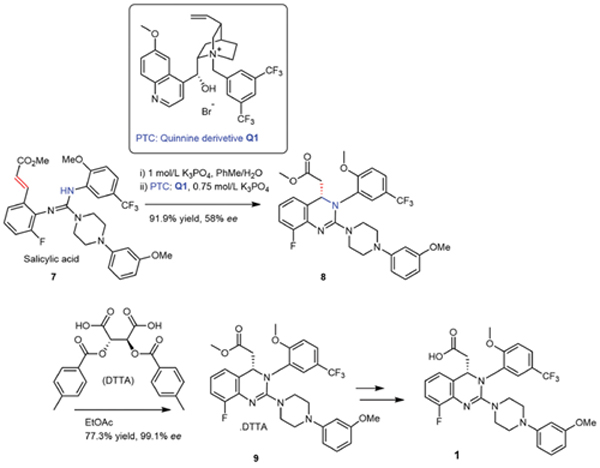 A series of mono- or bis-quaternary ammonium salts derived from cinchonidine or quinine was synthesized and screened as potent phase-transfer catalysts for the reaction of aza-Michael cyclization, the key step in the synthesis of letermovir. During the reaction of aza-Michael cyclization, the screened monoquaternary ammonium salt quinine derivative Q1 transferred 7 to 8 with 91.9% yield and 58% ee. The application of Q1 was preferred, due to its enantioselectivity, the possibility of reuse, and the lower cost in large-scale preparation. Furthermore, the racemization condition of letermovir enantiomer was also explored for the possibility to develop the resolution/racemization process. With the optimal catalyst Q1 in hand, the synthesis of letermovir may be more convenient and economical in the future.

Human cytomegalovirus (HCMV) infections remain a prevalent cause for morbidity and mortality in immunosuppressed solid-organ and bone-marrow transplant patients, and the most frequent cause of opportunistic viral infection following transplantation.[1] [2] The incidence of HCMV infection in the general population ranges from 36 to 90%, and the seropositivity increases with age and tends to be highest among lower socioeconomic groups.[3] [4] Letermovir is a novel antiviral compound currently used for the prevention of HCMV infections. Before the approval of letermovir, the first line of systemic anti-HCMV drugs includes ganciclovir, foscarnet, and cidofovir, which are derivatives of nucleosides and all target the DNA polymerase, yet, associated with significant side effects such as clinically significant myelosuppression,[5] [6] leading to the limited use of them in HCMV therapy.[7] Thus, developing a safe and effective agent for HCMV therapy has been an area of unmet need that is urgently needed in cytomegalovirus (CMV) management. In November 2017, letermovir was approved by the U.S. Food and Drug Administration for CMV prophylaxis in adult allogeneic CMV-seropositive hematopoietic stem cell transplant recipients.[8] As a novel 3,4-dihydro-quinazoline-4-yl-acetic acid derivative, letermovir represents a new class of nonnucleoside CMV inhibitors. Unlike other anti-CMV therapies, letermovir disturbs the late stages of viral replication rather than inhibiting the viral DNA polymerase,[9] [10] with no significant myelotoxicity or nephrotoxicity appearing.[11]

The commercial synthetic route to letermovir (1) was reported by Merck and Co., Inc.[12] Letermovir was obtained from 2 through eight steps, including heck reaction, urea condensation, dehydration, electrophilic substitution, asymmetrical aza-Michael cyclization, chiral resolution, and hydrolysis. The key step is the enantioselective aza-Michael cyclization with bis-quaternary ammonium salt cinchonidine derivative A using as the phase-transfer catalyst (PTC) ([Scheme 1]). PTC A is not commercially available and needs to be prepared from a very expensive material, cinchonidine. Moreover, as a di-benzyl-substituted bis-quaternary ammonium salt, PCT A is hard to be recycled due to its instability in the reaction and the work-up process. This made us find a better PTC for the replacement.

Inspired by our previous work on the synthesis of dezocine, 17 monoquaternary ammonium salts, derived from cinchonidine or quinine ([Scheme 2]), were screened as the PTCs for the asymmetrical alkylation of 1-methyl-7-methoxy-2-tetralone and some of them were found to function well.[13] As a continuation, it is interesting to evaluate their effect on the asymmetrical aza-Michael cyclization. Herein, we reported an effective and economical route to synthesize letermovir using a quinine-derived monoquaternary ammonium salt (Q1) as the PTC in the reaction of aza-Michael cyclization. When we used Q1 as the catalyst, the cost of the catalyst was far cheaper in comparison to that of PCT A; furthermore, the catalyst can be reused and the ee value of the target product (8) was 58%. Thus we consider that Q1 was a better catalyst for the aza-Michael cyclization.

All solvents and reagents were purchased from commercial sources and were used without further purification except compound 2, which was used after distillation. 2 (2-bromo-6-fluorobenzenamine) was purchased from Fuxin Jintelai Fluorin Chemical Co., Ltd. Quinine and cinchonidine were purchased from Shanghai Macklin Biochemical Co., Ltd. (+)-di-p-Toluoyl-D-tartaric acid (D-(+)-DTTA) was purchased from Shanghai Haoyuan Chemexpress Co., Ltd. Melting points were determined on a Büchi Melting Point M-565 apparatus. 1H spectra were recorded using a Bruker 400 MHz spectrometer with chlorotrimethylsilane as an internal standard. Mass spectra were recorded with a quadrupole time-of-flight mass spectrometer using electrospray positive ionization (ESI + ). The enantiomeric ratio was determined by high-performance liquid chromatography (HPLC, Agilent 1260) with a chiral column (CHIRALPAK IA). The eluent was the solution of hexane/isopropyl alcohol (75:25) with 0.1% diethylamine being added, and the detection wavelength was 254 nm. Specific rotations were determined on a Rudolph Research Analytical automatic polarimeter IV. All reactions were monitored by thin layer chromatography, which were performed on silica gel GF254. Column chromatography was performed on silica gel (200–300 mesh) purchased from Qingdao Ocean Chemical Company of China.

General Procedure for the Preparation of Methyl-(S)-2-(8-fluoro-3-(2-methoxy-5-(trifluoromethyl)phenyl)-2-(4-(3-methoxyphenyl)-piperazin-1-yl)-3,4-dihydroquinazolin-4-yl)acetate(2S,3S)-2,3-bis((4-methylbenzoyl)oxy)succinate ethyl acetate solvate (9)

The literature suggested that alkaloids bearing benzyl with electron-withdrawing groups are beneficial for the enantioselective aza-Michael addition.[12] Therefore, eight monobenzyl quaternary ammonium salts from cinchonidine (C1–C4) and quinine (Q1–Q4) were adopted to evaluate the structure–enantioselectivity relationship, and six bis-quaternary ammonium salts (C5–C7 and Q5–Q7) were used for comparison.

The aza-Michael cyclization of compound 7 was performed in toluene/H2O with the base of K3PO4 and the catalysis of PTC. When compound 7 was completely consumed, the target product was purified by flash chromatography followed by enantioselectivity analysis through a chiral HPLC determination. The results are listed in [Table 1].


b Enantioselectivity was determined by chiral HPLC analysis.


Our data suggested that monoquaternary ammonium salts, both from cinchonidine (C1–C4) and quinine (Q1–Q4), had a good effect on enantioselectivity; for example, both entry 1 and entry 8 gave the enantiomeric ratio of 8a:8b at 79:21. This result was meaningful, because the commercial price of quinine is about one-20th of that of cinchonidine. Besides, the results further demonstrated that the benzyl substituted with two trifluoromethyl was better than that substituted with one trifluoromethyl (C1 versus C2 or C3; Q1 versus Q2 or Q3), so compound Q1 could be considered as the potential PTC. The screening results also suggested that other electron-withdrawing groups in benzyl such as 3,4-dichloro did not improve the enantiomeric ratio.

According to the result of the PTC screening, the catalytic mechanism was proposed as shown in [Scheme 3]. Briefly, an anion on the nitrogen of the guanidine moiety of 7 was formed through base treatment, then, the anion intermediate interacted with the catalyst to form the transition state through an ionic bond in the interface of the bi-phase (toluene/water), as well as a hydrogen bond between the carbonyl oxygen atom of the substrate and the hydroxyl of the catalyst. Meanwhile, the phenyl on the substrate provided the π–π interaction with the benzyl of the catalyst. Under the action of the catalyst, N- selectively attacked the substrate in the opposite direction to the π–π interaction site to complete the stereoselective aza-Michael cyclization.

The optimal PTC Q1 encouraged us to optimize the total synthetic route of letermovir that was reported by Merck and Co., Inc. [Scheme 4] illustrates an optimized process of letermovir (1) synthesis in comparison to a reported study.[12] Briefly, compound 7 (as a salicylic acid salt) was obtained from 2-bromo-6-fluoroaniline through five steps and underwent the stereoselective aza-Michael cyclization under the catalysis of Q1. After DTTA resolution, 9 was hydrolyzed in MeOH/H2O to give the target 1.

However, some trouble was encountered in practice. During dissociation of the freebase from 7 in the presence of base K3PO4 at ca. 30°C, some percentage (10–30%) of the background aza-Michael cyclization already taken place before the addition of PTC. It was pleased to find that if this dissociation was performed at 0 to 5°C, the background reaction could be eliminated. In the presence of Q1 and K3PO4, 8 was obtained from 7 in a yield of 68.3% with 58% ee. After the salt formation with D-(+)-DTTA in ethyl acetate, the ee value increased to 99.3%. The catalyst was recovered by column chromatography from the mother liquor and could be reused in the same reaction without the loss of yield or ee value.

In the hydrolysis step, a long reaction time (at least 20 hours) was required when the hydrolysis was performed in NaOH aqueous solution at 60°C, according to a reported study,[12] which increased the risk of the racemization of the product. To our delight, when the reaction solution was replaced with NaOH aqueous solution/MeOH (v/v = 1:2), the reaction could be performed at room temperature and the reaction time could be shortened to approximately 1 hour, giving 1 in a yield of 95%, an achiral purity of 99.5%, and a chiral purity of 99.4%.

A small amount of racemization was also observed in the hydrolysis step, especially if the reaction lasted for a long time. To verify the possibility of the racemization of the product and develop the process to reuse the enantiomer of letermovir, experiments on the racemization of the enantiomer were further designed. The mother liquor (8a:8b/9.3:90.7) from D-(+)-DTTA salt formation was recovered and hydrolyzed into the acid, which was used for the racemization, and the result is included in [Table 2]. Our data suggested that sodium methoxide in acetonitrile or methanol under reflux did not realize the racemization. 1,8-Diazabicyclo[5.4.0]undec-7-ene (DBU) was not the ideal base. Finally, racemization could be performed under the condition of 2 equiv. of KOH in DMSO at 100°C (entry 5) with R:S = 52.7: 47.2 identified by chiral HPLC. This result laid the foundation to develop a recycling process of resolution/racemization to reuse the enantiomer of letermovir.

a 30% solution in methanol.

In summary, an optimal catalyst Q1 (quinine-derived monoquaternary ammonium salt) was explored, due to its good enantioselectivity, easy preparation from cheap material, as well as the possibility of reuse. With the use of the selected Q1, the synthesis of letermovir would be more convenient and economical. Furthermore, the hydrolysis (the last step) of the total synthesis route of letermovir was also improved to ensure the purity of the target product. The racemization condition of the enantiomer of letermovir was explored for the possibility to develop the resolution/racemization process so that the enantiomer could be completely used.

Detailed information for the synthesis of the catalysts C1–C8, Q1–Q7, as well as the chiral HPLC diagrams of 8 is provided and available online only.

© 2021. The Author(s). This is an open access article published by Thieme under the terms of the Creative Commons Attribution License, permitting unrestricted use, distribution, and reproduction so long as the original work is properly cited. (https://creativecommons.org/licenses/by/4.0/)