CC BY-NC-ND 4.0 · Organic Materials 2019; 01(01): 038-042
DOI: 10.1055/s-0039-1700849
Short Communication
The Author(s). This is an open access article published by Thieme under the terms of the Creative Commons Attribution-NonDerivative-NonCommercial-License, permitting copying and reproduction so long as the original work is given appropriate credit. Contents may not be used for commercial purposes, or adapted, remixed, transformed or built upon. (https://creativecommons.org/licenses/by-nc-nd/4.0/). (2019) The Author(s).

PDF Download Permissions and Reprints All articles of this category 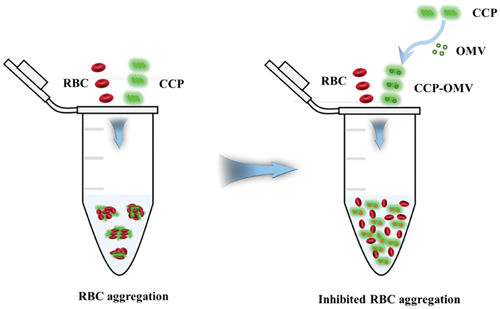 Cationic conjugated polymers (CCPs) have been attracting a lot of attention in biomedical applications because of their good photoelectric properties and good cell viability. However, positively charged components may reduce the electrostatic repulsion among red blood cells (RBCs) and induce RBC aggregation, which may lead to thrombus. Herein, in this work, we prepared the complexes of CCPs and outer membrane vesicles (OMVs) to inhibit RBC aggregation induced by CCPs and improve the biocompatibility of CCPs. A poly(fluorene-co-phenylene) derivative (PFP), a poly(p-phenylenevinylene) derivative (PPV), and a poly(thiophene) derivative (PMNT) were chosen as the model CCPs, and OMVs were used as the representative of a cell membrane. The CCP–OMV complexes were formed mainly driven by electrostatic interactions. Besides, the electrostatic CCP–OMV complexes were proved to be able to prevent the RBC aggregation induced by CCPs while maintaining the hydrophobic interactions between CCPs and RBCs.

Red blood cells (RBCs) are the most abundant cells in blood and take responsibility for transporting oxygen and carbon dioxide.[1] Generally, the electrostatic repulsion which comes from the surficial negative charge of RBCs maintains the suspension stability of RBCs. However, the increase of positively charged proteins in blood will lead proteins to absorbing onto the surface of RBCs and neutralize the negative charge, reducing the electrostatic repulsion among RBCs and inducing RBC aggregation. Then the RBC aggregation may cause thrombus and threaten human life and health.[2]

Conjugated polymers (CPs) have been attracting much attention in the applications of biosensing and imaging,[3] bacterial detection and inhibition,[4] and cancer diagnosis and therapy,[5] due to their good photoelectric properties, such as light harvesting, signal amplification, high quantum yield, and good photostability. The introduction of positively charged groups can not only improve the water solubility of CPs, but also facilitate the interactions between CPs and negatively charged biological components (e.g. DNA,[6] cells,[7] bacteria[8]) through electrostatic attraction. Nevertheless, the nonspecific electrostatic attraction may cause unwished influences to other negatively charged components while interacting with targets, for instance, the induction of RBC aggregation. Thus, improving the biocompatibility of cationic CPs (CCPs) is of great importance in propelling the biomedical applications of CPs.

Recently, cell membrane-coated nanoparticles have received a lot of attention and have seen developments in biomedical fields. This membrane-coating technology can enhance the efficiency of materials by extending blood circulation time and inducing immune response.[9] Inspired by this technology, we used outer membrane vesicles (OMVs) of Pseudomonas aeruginosa (P. aeruginosa) as a cell membrane model and used a poly(fluorene-co-phenylene) derivative (PFP),[10] a poly(p-phenylenevinylene) derivative (PPV),[11] and a poly(thiophene) derivative (PMNT)[12] as typical CCPs, to form CCP–OMV complexes. CCPs displayed relatively good biocompatibility, for instance, PMNT could even promote cell growth without serum. We discovered that CCP–OMVs can effectively avoid the RBC aggregation induced by CCPs, which proved the improved biocompatibility of CCP by forming CCP–OMV complexes.

The UV-Vis absorption and fluorescence emission spectra of CCPs in water were measured before and after the complex formed ([Figure 1]). CCPs used in this work were PFP, PPV, and PMNT, whose λ max,abs/λ max,em values are 393/427, 451/570, and 410/527 nm, respectively. After the formation of the electrostatic CCP–OMV complexes, the spectral properties of PFP and PPV were scarcely influenced. While for PMNT, both of the absorption and emission spectrum intensities decreased and the maximum absorption wavelength had a slight blue-shift from 401 to 387 nm, which might result from conformational change of PMNT in the complex aggregate.

The CCP–OMV complexes were formed by mixing OMV solution (80 μg/mL) and CCP solution at room temperature for 4 h. The detailed procedure of preparation of CCP-OMVs is given in the References and Notes section.[13] And the CCP–OMV complexes were characterized through laser scanning confocal microscopy (LSCM; [Figure 2]), TEM (see [Figure S2] in the Supporting Information), and SEM (see [Figure S3] in the Supporting Information), which indicated the formation of CCP–OMV complexes. As shown in [Figure 2], the interactions between CCPs and OMVs would strengthen along with the increase of CCP concentration. Besides, PFP displayed the strongest interaction with OMVs among these three CCPs under the same conditions.

Likewise, to have a better understanding of the interaction mechanisms between CCPs and CCP–OMVs with RBCs, zeta potentials were measured and the thermodynamic changes during the interaction of PPV and PPV–OMVs with RBCs were also measured. As shown in [Figure 5a], the zeta potential of RBCs in physiological saline solution was −12.9 ± 1.5 mV. After interacting with PFP and PFP–OMVs, the zeta potential values changed to −11.9 ± 1.1 and −8.99 ± 0.7 mV, respectively, suggesting a stronger electrostatic interaction between PFP–OMVs and RBCs than that with PFP. In contrast, the zeta potential values of RBCs changed to −8.83 ± 0.9 and −11.0 ± 0.6 mV after interacting with PPV and PPV–OMVs, suggesting a stronger electrostatic attraction between PPV and RBCs than that with PPV–OMVs. The results are consistent with the LSCM results ([Figure 2]). For PMNT and PMNT–OMVs, both of them did not cause obvious changes in RBC zeta potential, which might be attributed to the relatively low electric charge density of PMNT and weaker electrostatic interaction between PMNT with RBCs.

As shown in [Figure 5b], the interactions of RBCs with PPV and PPV–OMVs both were endothermal processes, indicating the main driving force of the hydrophobic interaction. Besides, learning from the binding constant (Ka ) and binding ratio (N) (see [Table S1] in the Supporting Information), PPV–OMVs displayed stronger interaction than PPV. Therefore, the formation of PPV–OMV complexes not only avoided inducing RBC aggregation, but also retained the hydrophobic interaction between PPV and RBCs.