Boosting the Stability of Boron Peroxides through Subphthalocyanine Coordination 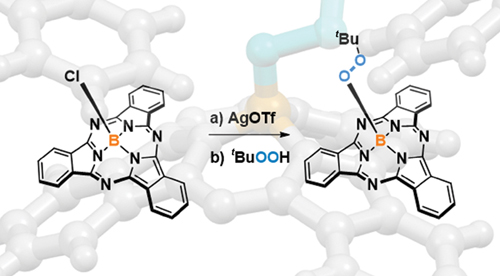 The great potential of subphthalocyanines (SubPcs) to stabilize boron peroxides has been demonstrated. In particular, a subphthalocyanato boron (III) peroxide has been prepared in good yield via boron triflate. This derivative is remarkably stable under ambient conditions and can be fully characterized. The impact of the peroxide group on the structural and optoelectronic properties of SubPc was examined by NMR and UV/Vis spectroscopies, as well as single-crystal X-ray diffraction analysis. Moreover, density functional theory calculations were performed to explain the experimental results. The reactivity of this peculiar boron peroxide as an oxidant and a Lewis base was also studied.

Since the discovery of Brown hydroboration-oxidation in the late 1950s,[1] organic boron peroxides have been of paramount importance in chemistry due to their remarkable versatility. For instance, these species have been widely used as initiators of radical chain reactions[2] and postulated as key intermediates in many relevant transformations, such as oxygen activation,[3] oxygen-transfer reactions[4] or the palladium-catalyzed homocoupling of aryl boronic acids.[5] However, despite extensive research in the field, there is still limited knowledge about the structural/electronic factors that govern their stability and reactivity. This is primarily because boron peroxides typically show low stability and hence their full characterization is often hampered. Therefore, establishing new guidelines for the preparation of highly stable boron peroxides is crucial for their understating and further development.

To the best of our knowledge, there are only seven examples that report structurally characterized organic boron peroxides.[3a] [3b] [3c] [6] In six of them, the strategy to stabilize the peroxide has involved its embedding in cyclic structures or its trapping with bulky electrophilic boranes. Nevertheless, although appealing, these systems are very particular and are not suitable for systematic studies. On the other hand, Osuka et al. demonstrated that the coordination of boron with subporphyrins (SubPs) significantly improves the stability (ROO-SubP, [Figure 1]).[7] Indeed, this method allowed for the first time the characterization of acyclic and neutral boron peroxides. However, some of these peroxo-SubP still suffered from low stability under certain conditions, such a heating or reductive/electrophilic environments. In view of this precedent, one could think that the use of other subporphyrinic ligands may further improve such stability.

Related to SubP, subphthalocyanines (SubPcs) are an important class of porphyrinoids composed of an isoindole-based tridentate ligand that coordinates a central boron atom with an axial substituent.[8] In contrast to SubP, SubPcs present peripheral benzene rings and nitrogen at peripheral and meso-positions, respectively. This structural difference results in a more electrophilic boron atom that binds the axial substituent more strongly than SubP, particularly in the case of hard bases such as oxygen or fluorine. For this reason, the axial functionalization of SubPc with phenols or carboxylic acids has been the strategy of reference to prepare a variety of robust multicomponent systems.[9] Taking this axial stability into account, we believed that SubPcs could also be a great candidate to prepare highly stable boron peroxides.

In this communication we disclose, for the first time, the synthesis and characterization of a boron (III) subphthalocyanato peroxide ( t BuOO-SubPcH12 ). This derivative exhibits an outstanding stability under ambient conditions, which allows its full characterization both in solution and in solid state. X-Ray diffraction analysis reveals that the peroxide group is strongly bound to the boron atom and largely affects the organization within the crystal structure. On the other hand, relevant differences in the optical and electrochemical properties are also observed. The electronic structure of this derivative is also analyzed by density functional theory (DFT) calculations. Finally, the reactivity of this particular SubPc is briefly examined by carrying out its reaction with a reductant and a peroxide scavenger.

Non-substituted SubPc with tert-butyl-peroxide as the axial ligand was selected as a model substrate for this study ( t BuOO-SubPcH12 , [Scheme 1]). The synthesis of t BuOO-SubPcH12 was firstly tackled following various literature methods for the axial exchange of Cl-SubPcH12 , such as the direct substitution in high boiling-point solvents or the use of trimethylsilyl nucleophiles.[10] Moreover, the conditions used by Osuka et al. to prepare ROO-SubP were also tested.[7] However, these attempts ended in recovery of Cl-SubPcH12 or macrocycle decomposition. Given this lack of reactivity of boron, we decided to employ triflate SubPc (TfO-SubPcH12 ). This activated intermediate was obtained following a procedure reported in our group, which involves the chlorine abstraction by silver triflate (AgOTf).[11] Fortunately, the subsequent one-pot reaction of TfO-SubPcH12 with t BuOOH in the presence of diisopropylethylamine furnished t BuOO-SubPcH12 in 86% yield ([Scheme 1]). Remarkably, t BuOO-SubPcH12 displayed an exceptional stability under ambient conditions, remaining unaltered after prolonged durations in solution, upon heating or even light exposures. Once isolated, this peroxide can be stored for several months without decomposition.

As a result of this stability, the full characterization of peroxide t BuOO-SubPcH12 was readily accomplished by several spectrometric and spectroscopic techniques (see the [Supporting Information]). The parent ion peak of t BuOO-SubPcH12 was detected at m/z = 484.1840 (calcd for (C28H21BN6O2)+ = 484.1819 [M]+) by matrix-assisted laser desorption ionization time-of-flight (MALDI-TOF) mass spectrometry. Additionally, other characteristic signals such as the loss of axial substituent or SubPc with a hydroxy ligand were also observed. The 1H NMR spectrum is quite simple, exhibiting the AA′XX′ system of per-hydrogenated SubPc with a C3v symmetry (α-protons at 8.88 ppm and β-protons at 7.89 ppm), and a singlet at 0.34 ppm corresponding to tert-butyl moiety. On the other hand, the 11B-NMR displays a sharp singlet at −13.8 ppm. As observed for t BuO-SubP, SubPc with tert-butoxy at the axial position ( t BuO-SubPcH12 )[11] exhibits all of these spectral signals at lower frequencies,[12] suggesting that the peroxo ligand is more electron withdrawing than tert-butoxy.

Single crystals of t BuOO-SubPcH12 suitable for X-ray diffraction analysis were obtained by slow diffusion of methanol into its chloroform solution. The structure of t BuOO-SubPcH12 and selected crystallographic data are shown in [Figure 2a] and [Table 1], respectively. Compared to t BuO-SubP, t BuOO-SubPcH12 exhibits a very similar O–O bond length (1.480 Å and 1.475 Å). In contrast, they differ significantly in B–O bond lengths (1.445 Å and 1.450 Å), being shorter in the latter case. This fact suggests that tert-butyl-peroxide is linked to the boron atom much stronger in SubPc than SubP. On the other hand, when compared to other SubPcs with B–O bonds, as t BuO-SubPcH12 and CH3COO-SubPcH12 (acetate-), t BuOO-SubPcH12 exhibits a relatively long B–O bond that resembles that of a SubPc bearing an axial carboxylate. Accordingly, the bowl-shape structure of t BuOO-SubPcH12 is flatter than that of t BuO-SubPcH12 and similar to that of CH3COO-SubPcH12 , as inferred from bowl depth values. Thus, although more stable than SubP, it can be expected that axial peroxide SubPc could be a good leaving group rendering SubPc peroxides interesting precursors to generate cationic SubPc-based boron species.[13] With regard to the crystal packing, t BuOO-SubPcH12 arranges in a monoclinic crystal with a P 1 21/n 1 space group. Each molecule is organized in concave–concave head-to-head dimers linked together by π–π interactions (cv–cv h–h; [Figure 2b]).[14] These dimers, in turn, interact with adjacent dimers through O···H (2.465–2.702 Å) giving rise to the solid-state packing depicted in [Figure 2c].

a Bowl depth is defined as the distance between the boron atom and the plane containing: the pyrrolic nitrogen (BDpyr), the meso nitrogen (BDimine) or the outermost carbon atoms (BDterm).


Concerning the optoelectronic properties, t BuOO-SubPcH12 displays the typical UV/Vis absorption and emission spectra of a SubPc derivative ([Figure 3a]), comprising a Soret band at 305 nm and a Q-band at 563 nm, and a fluorescence maximum at 580 nm. More interestingly, it was found that the peroxo ligand enhanced the quantum yield (0.86) in comparison with the starting Cl-SubPcH12 (0.73).[15] Subsequently, the electrochemical behaviour of this unique derivative was examined by cyclic and differential pulse voltammetry ([Figure 3b]). The first reduction and oxidation peaks appear within the expected range of unsubstituted SubPcs and correspond to one-electron processes.[16] However, to our surprise, while the first reduction is reversible in Cl-SubPcH12 , in the case of t BuOO-SubPcH12 this process was found to be irreversible, suggesting that the radical anion of SubPc is not so stable with peroxide as an axial substituent.

In order to gain further insights into the electronic structure of t BuOO-SubPcH12 , we performed DFT and time-dependent-DFT calculations at the CAM-B3LYP/6-31G(d) level of theory ([Figure 3c]). In line with the experimental results, the simulated UV/Vis spectrum comprises two intense absorption bands (Q and Soret) which correspond to the HOMO–LUMO and HOMO–LUMO + 1 transitions (oscillator strengths of 0.3354 and 0.3363, respectively). The orbitals involved in such transition are mainly localized over the aromatic skeleton thus reaffirming that the axial ligand does not affect the optical properties of SubPcs.[8] Accordingly, t BuOO-SubPcH12 and Cl-SubPcH12 displays similar UV/Vis profiles. In the case of the orbitals responsible for the electrochemical reduction (LUMOs), a certain contribution of the peroxo fragment is observed. However, it is negligible when compared to that of the p-skeleton and therefore similar reduction potentials for t BuOO-SubPcH12 and Cl-SubPcH12 are expected. On the other hand, the HOMO − 1, which is 1.95 e V more stable than the HOMO, is entirely located over the tert-butyl-peroxide ligand, particularly in the oxygen lone-pair region. This highly stable orbital is expected to be the one that determines the reactivity of t BuOO-SubPcH12 against electrophiles.

Finally, the reactivity of this peculiar SubPc was preliminarily explored ([Scheme 2]). To this end, we considered two kinds of reactions. First, we evaluated the oxidant properties of t BuOO-SubPcH12 by carrying out a reaction with triphenylphosphine as a reductant ([Scheme 2a]). To our surprise and, in contrast to peroxo-SubP, the disappearance of 3 was not observed even after 24 h at reflux. Then, in a second experiment, the reactivity of t BuOO-SubPcH12 as a nucleophile was tested by performing the reaction with trityl cation (Ph3C+) as a peroxide scavenger ([Scheme 2b]). Again, t BuOO-SubPcH12 showed no reactivity. These findings stress the higher stability of SubPc boron peroxide with respect to its SubP analogue.

In summary, we have described the synthesis of the first SubPc boron peroxide ( t BuOO-SubPcH12 ). This compound exhibits a remarkable stability both in solution and solid state, which has allowed its full characterization. In this regard, it has been found that the peroxyl moiety has a significant impact on the structural and electronic properties. For instance, the solid-state packing of t BuOO-SubPcH12 is governed by O···H interactions formed between the O–O fragment and peripheral hydrogen atoms, and the fluorescence quantum yield is enhanced. On the other hand, the irreversible reductions observed by electrochemical measurements suggested that the peroxide ligand negatively affects the stability of the reduced SubPc. Finally, the reactivity as a mild oxidant and nucleophiles has been tested. In contrast to its SubP congener, which reacts at room temperature in few minutes, t BuOO-SubPcH12 has not shown activity when reacted with triphenylphosphine or trityl cation. For the above results, we can conclude that SubPc is an excellent ligand for the stabilization of boron peroxides and should be considered for systematic studies. Apart from this, we believe that peroxo SubPcs could be key intermediates within the SubPc research, for instance in the discovery of novel axial reactions, the understanding of SubPc photo-oxidation in solar cells, or the therapy with several reactive-oxygen species.


Dedicated to Professor Peter Bäuerle on the occasion of his 65th Anniversary.

© 2021. The Author(s). This is an open access article published by Thieme under the terms of the Creative Commons Attribution-NonDerivative-NonCommercial License, permitting copying and reproduction so long as the original work is given appropriate credit. Contents may not be used for commercial purposes, or adapted, remixed, transformed or built upon. (https://creativecommons.org/licenses/by-nc-nd/4.0/)