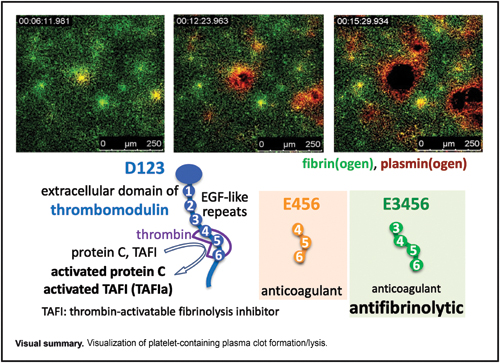 Background Thrombomodulin (TM) functions as a dual modulator—anticoagulant and antifibrinolytic potential—by the thrombin-dependent activation of protein C and thrombin-activatable fibrinolysis inhibitor (TAFI). Activated TAFI cleaves the C-terminal lysine of partially degraded fibrin and inhibits both plasminogen binding and its activation on the fibrin surface. We have reported previously that activated platelets initiate fibrin network formation and trigger fibrinolysis after the accumulation of tissue-type plasminogen activator and plasminogen.

Objective To analyze the effects of domain-deletion variants of TM on coagulation and fibrinolysis at different concentrations.

Methods Domain-deletion variants of TM, such as D123 (all extracellular regions), E3456 (minimum domains for thrombin-dependent activation of protein C and TAFI), and E456 (minimum domains for that of protein C but not TAFI), were used at 0.25 to 125 nM for turbidimetric assay to determine the clotting time and clot lysis time and to visualize fibrin network formation and lysis in platelet-containing plasma.

Results and Conclusions A low concentration of either D123 or E3456, but not of E456, prolonged clot lysis time, and delayed the accumulation of fluorescence-labeled plasminogen at the activated platelets/dense fibrin area due to effective TAFI activation. Conversely, only the highest concentrations of all three TM variants delayed the clotting time, though fibrin network formation in the vicinity of activated platelets was almost intact. TAFI activation might be affected by attenuation in thrombin activity after the clot formation phase. These findings suggest that the spatiotemporal balance between the anticoagulant and antifibrinolytic potential of TM is controlled in domain- and concentration-dependent manners.

© 2022. The Author(s). This is an open access article published by Thieme under the terms of the Creative Commons Attribution-NonDerivative-NonCommercial License, permitting copying and reproduction so long as the original work is given appropriate credit. Contents may not be used for commercial purposes, or adapted, remixed, transformed or built upon. (https://creativecommons.org/licenses/by-nc-nd/4.0/)