Enhancement of Aqueous Solubility, Dissolution Profile, and Oral Bioavailability of Pentoxifylline by Microsponges 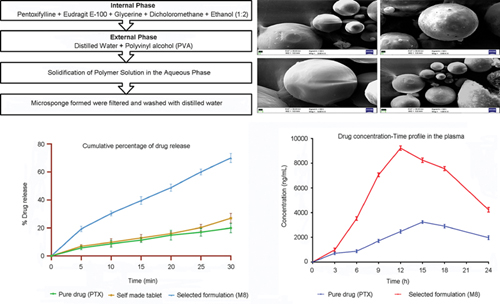 Microsponge, a novel drug delivery system, is designed to deliver a pharmaceutically active ingredient efficiently at the minimum dose. Microsponge plays an important role in enhancing drug stability, reducing side effects, and modifying drug release profiles. It is mostly used for transdermal delivery. Recent studies also explored their use for oral administration. This study aimed to explore the potential use of the microsponge technique in improving the aqueous solubility and dissolution profile of pentoxifylline (PTX). In this study, microsponges were prepared by a quasi-emulsion solvent diffusion method by varying concentrations of carriers. Nine different ratios of the PTX:Eudragit E-100 with varying amounts of dichloromethane were used. All formulated microsponges were evaluated for %production yield, compatibility of drug excipient, encapsulation efficiency, in vitro drug release, and in vivo bioavailability, as well as recorded by scanning electron microscopy (SEM) and differential scanning calorimetry(DSC). Our data suggested that the aqueous solubility of PTX microsponges was four times greater than that of pure drug. The in vitro drug release of selected microsponges (M8) was found to be 70%; furthermore, the in vivo study suggested that the selected formulation significantly enhanced drug concentration in the plasma (9,219 ng/mL in 12 hours) in comparison to pure drug PTX (2,476 ng/mL in 12 hours). SEM showed that the prepared microsponges were spherical with porous nature. Fourier-transform infrared spectroscopy and DSC studies confirmed an absence of incompatibility among drugs and selected excipients. The pH of the selected gel was found to be 6.8, which was compatible with those of skin and oral formulations also. All above data suggested a highly successful and beneficial use of the microsponge technique in enhancing aqueous solubility, dissolution profile, and oral bioavailability of PTX. Microsponge-based delivery of PTX may represent an alternative strategy to improve the bioavailability of the drug.

© 2021. The Author(s). This is an open access article published by Thieme under the terms of the Creative Commons Attribution License, permitting unrestricted use, distribution, and reproduction so long as the original work is properly cited. (https://creativecommons.org/licenses/by/4.0/)