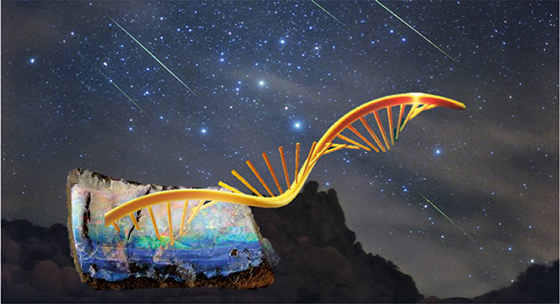 A widely held ‘RNA first’ model proposes that RNA gave organic matter on Earth its first access to Darwinism. Such a proposal, which requires a mechanism to generate RNA from a prebiotic ‘soup’, must also manage the intrinsic instability of any RNA so formed. Here, we show that silicon dioxide (silica, SiO2), in the form of synthetic opal, adsorbs and stabilizes RNA from aqueous solution. The extent of adsorption on fully amorphous silica is less, as is the extent of adsorption on the surface of crystalline quartz. We show that the RNA adsorbed on opal is considerably more stable than the same RNA molecule free in aqueous solution at pH 9.5. This provides a mechanism by which any RNA formed in a prebiotic environment could have been concentrated and stabilized so that it could have later participated in the first Darwinian biology.