Enrichment of Complement, Immunoglobulins, and Autoantibody Targets in the Proteome of Platelets from Patients with Systemic Lupus Erythematosus 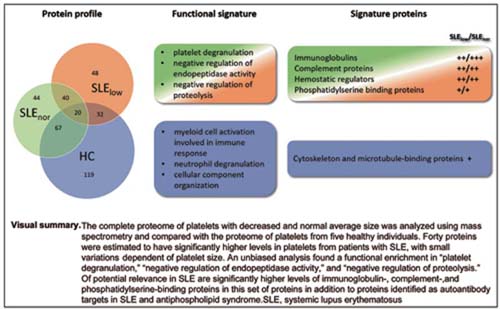 Background Systemic lupus erythematosus (SLE) is a complex disease characterized by autoimmunity toward apoptotic cells, excessive amounts of circulating immune complexes, and complement activation. A decreased platelet size has been observed in SLE and their nonhemostatic functions may play an active role in the disease. The main objective of this study was to find clues that could explain their decreased size and functional role, analyzing the entire platelet proteome.

Methods Platelets were isolated from 23 patients with SLE. The five individuals with the highest and lowest average platelet forward scatter were selected for further analysis. Platelet protein content was analyzed using liquid chromatography with tandem mass spectrometry (LC-MS/MS) and compared with platelets from five healthy controls. Data are available via ProteomeXchange with identifier PXD031202.

Results Out of 2,572 proteins identified, 396 had significantly different levels (ANOVA q-value ≤ 0.01). Forty proteins, including immunoglobulin-, complement- and phosphatidylserine-binding proteins had higher abundance in platelets from SLE patients, largely independent of size (fold difference of ≥1.5 and a t-test p-value of ≤0.05 as cut-off). Functional characterization revealed increased degranulation and skewed hemostatic balance in platelets from SLE patients. In the SLE proteome, immunoglobulin proteins were negatively correlated to serum complement C3 and C4 and the highest relative levels were detected in platelets of normal size.

Conclusion Platelets from SLE patients shared a specific protein profile, including immunoglobulins, complement proteins, and autoantigens, largely independent of the platelet size and in agreement with an integrated role for platelets in SLE.

© 2022. The Author(s). This is an open access article published by Thieme under the terms of the Creative Commons Attribution-NonDerivative-NonCommercial License, permitting copying and reproduction so long as the original work is given appropriate credit. Contents may not be used for commercial purposes, or adapted, remixed, transformed or built upon. (https://creativecommons.org/licenses/by-nc-nd/4.0/)